The history of Naxos is brief, for it lasted just over three centuries. An ally of Athens, in 403 BC it was destroyed by Dionysius I of Syracuse, who rewarded his Siculi allies by ceding the territory of the city to them, and deported the inhabitants, selling them as slaves in Syracuse. It was a drammatic and decisive event, which ended the story of Naxos and opened up that of Taormina (Tauromenion), founded soon after the distruction of Naxos. This circumstance, together with the fact that the modern settlement was not superimposed on the ancient one, has favoured archaeological research.

Right from the very start, activity concentrated on the city, with an investigation of the phases of its life and its morphology. It was the research done by Paola Pelagatti that defined its extension and distinguished two building phases: the first, datable to the period between the middle of the 7th century BC and the end of the 6th century BC; the second, orthogonal to it, done in the 5th century BC. Recent diggings are gradually delineating the layout of the oldest colonial settlement. 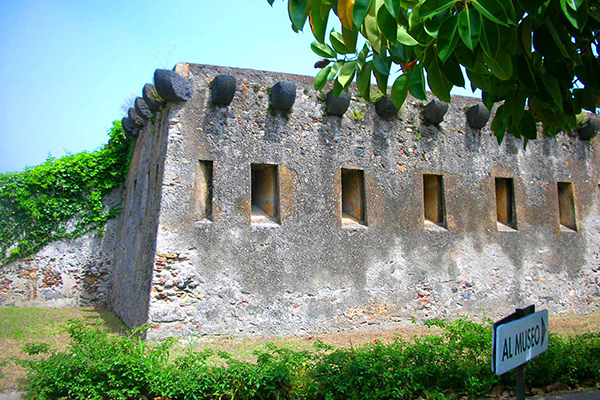 Three centuries of daily life, and not only…

The Naxos Archaeological Museum was inaugurated in 1979, crowning long and difficult research conducted by Paola Pelagatti, bearing in mind abnormal urban expansion that, outside all rules and in the space of a few years, had transformed the fine Recanati beach into a tourist and hotel pole. Now that much of the ancient area of the colony is demesnal and can be visited, the museum represents, though with limited spaces, an efficacious presentation of a visit to the diggings. Built on Cape Schisò, exploting the space of a Bourbon fort that encompassed a keep built in the late sixteenth century to guard the entrance to the port, the museum is closely linked to the site of Naxos: a strech of ancient boundary wall crosses its garden and at the museum there starts the itinerary that winds inside the urban area.

The museum’s collections are largely made up of finds from the various digging campaigns carried out in almost fifty years; there is also a small nucleus of material purchased in Taormina by Paolo Orsi, coming from searches he made, as in the case of the equipement of three graves at Cocolonazzo di Mola (1919 diggings) which, dating the second half of the 8th century BC, efficaciously represent the encounter between settlers and local Siculo populations. It is also to Paolo Orsi and to his attentive surveillance of the then flourishing antiques market at Taormina that we owe the utensils coming from a Malvagia store from Bronze age and the splendid decorated elmet from the 4th century BC, found at Moio, both sites in the lower valley at the Alcantara.

At last excepitions is constituited by a much more recent acquisition: this is the little altar known as the Heidelberg-Naxos one (530 BC), with affronted sphinxes, wich Paola Pelagatti put together again by joining a fragment kept at the Museum of Heidelberg University and another fragment she purchased in the 1973 at Giardini. The recomposition, wich only took place in 1997, enriched the museum with a notable example of pottery done at Naxos in the late 6th century BC.

For the rest, the display follows a criterion which is both chronological and topographical, with particolar attention being paid to the grouping of some classes of materials, above all slabs used for achitectonic lining and Silenus mask antefixes, which represent one of the most significant production developed uninterruptedly from the last decades of the 6th century BC to the and of the 5th century BC, affording a testimony to the spread of the cult od Dionysius, whose image characterised Naxos coinage right from the first issues.

The first rooms are devoted to the prehistoric phases of the site and to the initial period of the colony. The splendid Stentinello cup, found not far from the place of the museum, documents the start of life in the Neolithic as a village on Cape Schisò. The two big pythoi from the first Bronze Age belong to two tombs that, with skeletons hudled up inside, were discovered in the sonthwest sanctuary. There is more abundant documentation for the middle and late Bronze Ages, when a big fortified village law on the peninsula, in the castle area, where there is a bigger concentration of vestiges of the first colonial settlement. There is very little documentation relating to the Iron Age and the time when the Greeks came: on the basis of the notice provided by Ephorus, it would seem that, at the time of the foundation, the territory was deserted;the siculi lived elsewhere, on the nearby heights, as is well documented by the Colonnazzo di Mola necropolis.

Among the oldest materials from the colony, a major place is taken by the Corinthian importations, and in particular the numerous fragments of Thapsos cups (740-700 BC); named after the site near Syracuse where the first exemplar was found, they are deep cups, used both for drinking and for eating, characterised by a narrow decorated panel framed by horizontal lines.

Ceramics imported from Euboea and to greater extent imitations produced at Naxos soon after its foundation are abundantly found in the oldest levels of the settlement. There is a great variety of shapes: from big amphorae on feet, with late geometric decoration, to numerous craters, some with pouring spouts, and many types of cups – and among these, single-bird ones – and lekanai, as well as plates of various size, or jugs with cut necks, a shape of unmistakable Euboean derivation when found in a colonial context.

One of the two wings of the upper floor of the museum is devoted to items from the sacred areas, and another to items from the archaic and classical city and the 5th century BC and the 3rd century BC necropolises, with a limited choise of materials documenting the activity of potters in the 5th century BC. The display ends with a small selection referring to the later phases of life on the site. On the same floor, in the first room, in a showcase there are some exemplars of silver coins from the classical age minted at different cities in Sicily and Reggio.

The ex-votos from the southwest sanctuary of the city, mostly consisting in fictile feminine decorative relief heads from the late 6th century – however, the only complete exemplar on display comes from the seabed at Isola Bella – fill a showcase of the wing devoted to items from the sacred areas. The rest of this space is occupied by fictile linings of the roofs of the edifices of the two sanctuaries and by Silenus mask antefixes, wich, however, do not come exclusively from sacred areas: they are also found on the roofs of houses and on tomb coverings, thought they were prevalently used in sacred edifices. A major place is occupied in the room by the fragments of a pedimental slab with a Gorgon figure, of clear Corinthian derivation, which decorated the triangular space of the tympanum of an edifice in the sanctuary to the west of the Santa Venera stream (580 BC).

The vestiges of the settlements from the ends of the 7th century BC to the end of the 5th century BC mainly consists in vases , or fragments of vases; but among them there are other objects found in domestic contexts, like fragments of little altars with relief decoration, statuettes, oil-lamps and portable ovens; with fictile weights a model of a vertical loom has been reconstructed. The equipment found in the necropolis discovered in the Recanati area in 1975 is distributed in the 5th century BC, with a minor contribution of Attic imports. Among the equipment of the 3rd century BC graves, generally made up of ointment containers, a major place is occupied by the tomb of the Surgeon, with a rare and well preserved exemplar of a glass cup perhaps made in Alexandria (beginning of 3rd century BC).

Lastly, inside the keep there is an exhibition of under water finds: here is a vast collection of stone anchors and lead anchor chains (a true archive), mostly picked up in the 1960s in the sea of Naxos or in the nearby Taormina bays. 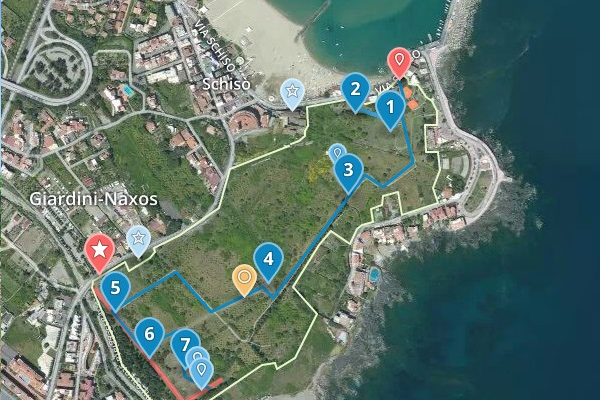 A journey in the ancient city

Leaving the Archaeological Museum, you enter directly into the urban site of Naxos. Its fortifications cross the garden and run parallel to the Borbonic fort and the tower of the museum. On the right you can see the complex with the castle of Schisò with a towering palm; closer are the remains of the Byzantine dwellings, built directly above the structures of the oldest archaic settlement of the VII-VI centuries a.C. From here it is reachable, through a path shaded by a large mulberry tree, the eastern side of the archaic fortifications of the city, that point to the castle with a beautiful view of the bay. Returning to the main path, now paved, we reach the temple C of the seventh century BC, covered with houses in the fifth century; houses that open onto one of the north-south roads, the “stenopos” 11, that can be crossed till we reach out to the intersection with plateia A , the main east-west axis of the system of the fifth century BC. Of the plateia stand out the considerable width (9.50 meters), the lateral channels well-paved and the houses bordering on it. Houses of the late eighth century BC stratch below the plateia. Important evidence of the first colonial station. Turning back along the main path for 200 meters, which in this stretch runs under a row of tall cypress trees, we get to the plateia B, the southernmost of the east-west axis of the classical city. At the entrance of the Plateia there are two large house of square plant, with a open central court. Considerably narrower of the platea A, but just the same it is flanked by paved gutters, the platea B is viable till the city gate 3. At the regular interval of 39 meters, it is interrupted by intersections with north-south arteries, all marked with square corner bases. Out of the narrow door, you can admire the fortifications: in polygonal Cyclopean tecnique, they have on this side of the imposing appearance of a wall. Returning to the city, you enter the south-western sanctuary through the monumental portal: here are the fundaments of the great temple B (late sixth century BC), superimposed on an older sacred building, sacello A, of the end of the seventh century.

On the south side, slightly sloping, we may observe under a roof the well-preserved remains of two furnaces of the late seventh century BC. The nearby rectangular altar, with steps on one of the long side, can be dated back to the early decades of the sixth century. The southern propylaeum, Port Marina, is not practicable, closed in ancient times due to defensive problems by a row of blocks. The beautiful south boundary wall of the sanctuary, wall D (early decades of the sixth century) is reachable through a modern passage at the eastern side of the propylaeum. It must be reported how the wall D is the oldest example in the West of the polygonal technique of bended joints.

Upon the western end of the wall can be seen, leaning, the remains of a square tower of later fortifications

A Handmade Hotel for a holiday custom made for you. Family owned and with a large and attentive staff, Palladio is a small hotel where we take great care of our guests: Situated in front of the beach stretching along the promenade of Giardini Naxos, the Hotel Palladio is a charme hotel with balconies and terraces overlooking the splendid bay and the cliffs of the mount in Taormina.

For any information please contact our Multi language reception 24H